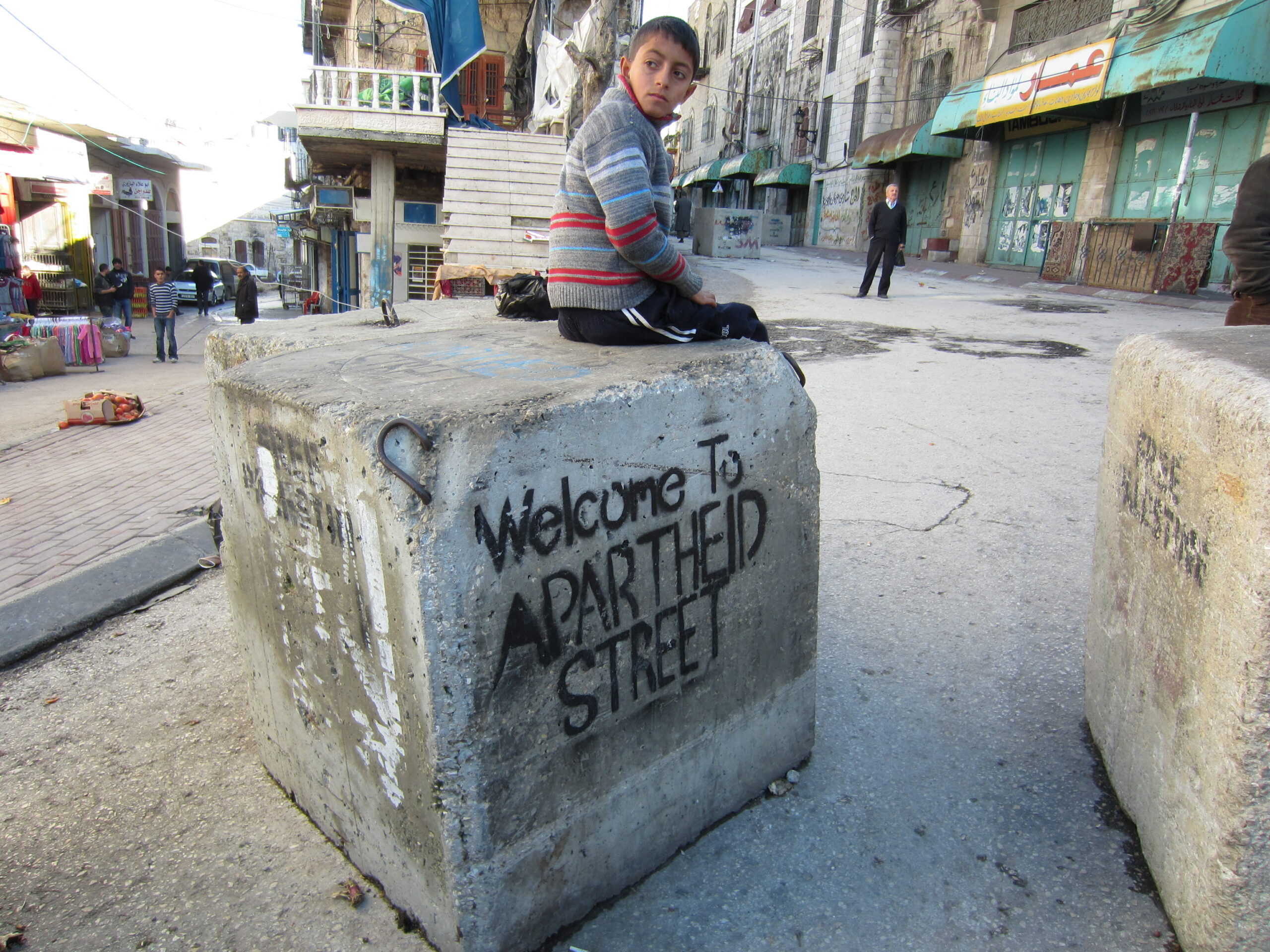 At that very moment, when I walked down a street stripped of Palestinians, I decided that I would never again avoid using the word “apartheid” to describe Israel’s policies against Palestinians. I know what apartheid is, and I was seeing it in front of me.

Learn which organizations and public figures are saying the word.

The apartheid regime is in all areas controlled by Israel, between the sea & the Jordan River. The distinction… between democratic Israel & the West Bank that it controls is wrong.

The state of Israel practices its own, quite violent, form of apartheid with the native Palestinian population.

We now have a law that confirms the Arab population as second-class citizens. It therefore is a very clear form of apartheid. I don’t think the Jewish people survived for 20 centuries, mostly through persecution and enduring endless cruelties, in order to now become the oppressors, inflicting cruelty on others. This new law [on nationhood] does exactly that. That is why I am ashamed of being an Israeli today.

On the Palestinian matter, [then Prime Minister Benjamin Netanyahu’s] policies are leading to either a binational state or an apartheid state.

The increasingly weighty body of scholarly, legal & public opinion that has designated Israel to be perpetrating apartheid.. [including] the African group, the Arab group & the OIC group.. must be a wakeup call.

[In South Arica] apartheid is in a museum. You have to visit a museum in order to know the history of apartheid. This means that institutionally and legally, the system is dismantled, and you are sovereign in your own country. There is one other place in the world where apartheid is still alive and kicking, and that is in Palestine.

The Zionist settler-state has learned all the lessons which the various discriminatory regimes of white settler-states in Asia and Africa can teach it. And it has proved itself in this endeavour an ardent and apt pupil, not incapable of surpassing its teachers. For, whereas the Afrikaner apostles of apartheid in South Africa, for example, brazenly proclaim their sin, the Zionist practitioners of apartheid in Palestine beguilingly protest their innocence.

This is our most important message to the world: how we confront this privilege, this colonialism, this apartheid, is with a democratic vision of a state for all of its citizens.

Haneen Zoabi, first Palestinian-Israeli woman to be elected to the Knesset (2009)

Israel is not consistent in its new anti-apartheid attitude. They took Israel away from the Arabs after the Arabs lived there for a thousand years. In that, I agree with them. Israel, like South Africa, is an apartheid state.

I have witnessed the systemic humiliation of Palestinian men, women and children by members of the Israeli security forces. […] Their humiliation is familiar to all black South Africans who were corralled and harassed and insulted and assaulted by the security forces of the [South African] apartheid government.

In our short stay here [in Israel/Palestine] we have seen and heard enough to conclude that Apartheid has been reborn here. In its reborn form it is however worse than its predecessor. Even during the worst days of Apartheid we did not have walls to divide and control people.

This is much worse than apartheid. The Israeli measures, the brutality, make apartheid look like a picnic. We never had jets attacking our townships. We never had sieges that lasted month after month. We never had tanks destroying houses. We had armoured vehicles and police using small arms to shoot people but not on this scale.

Apartheid is a word that is an accurate description of what has been going on in the West Bank, and it’s based on the desire or avarice of a minority of Israelis for Palestinian land. It’s not based on racism. Those caveats are clearly made in the book. This is a word that’s a very accurate description of the forced separation within the West Bank of Israelis from Palestinians and the total domination and oppression of Palestinians by the dominant Israeli military.

With the eyes of the international community wide open, Israel has imposed upon Palestine an apartheid reality in a post-apartheid world.

Whether Israel can legitimately be accused of carrying out apartheid in the West Bank – and I believe its actions fit within the international legal definition – it is clear that Palestinians’ rights are severely restricted as compared to their Israeli neighbours.

It’s important to describe the situation happening in Palestine and the situation that Palestinians are currently living under for what it is, which is a system of apartheid. That’s the truth.

It’s time. Long past time. The best strategy to end the increasingly bloody occupation is for Israel to become the target of the kind of global movement that put an end to apartheid in South Africa.

I am tired of people functioning from a place of fear rather than doing what’s right because of the bullying by pro-Israel lobbyists. This is apartheid, plain and simple.

Solidarity with Palestinians and all demanding an end to settler colonialism. More voices are calling out apartheid by Israel such as Amnesty International. Canada must end its complicity through action including stopping arms sales and banning illegal settlement goods.

We need to call a cat a cat. Israel practices apartheid against the Palestinian people. If, like me, you’re not afraid to use the word ‘apartheid’ to describe Israeli policies, then I invite you to sign the Together Against Apartheid pledge.

The Liberal government is incapable of explaining its support for Israel. It’s shameful. Honestly, there is no good justification for supporting a regime that invades mosques and practices apartheid.

What about the human rights violations in Israel and Palestine as highlighted by the Human Rights Watch report, or the apartheid that is practiced by Israel on Palestinians according to the Amnesty International report, or what the former Israeli Attorney General Michael Benyair says, [that] the country is following the Apartheid system.

“Apartheid” accurately captures the actions and policies of the Israeli government as defined under international law and as documented by organizations including Human Rights Watch, Amnesty International, Al-Haq and B’Tselem.

In the 1970s and ’80s, there was no question – we all focused on South Africa because it was the obvious place to focus. It was a place where it looked like all of us who took part in the Anti-Apartheid Movement, as it was called then, might have an effect, and might cause changes in policy in that small part of the world. Israel is that bit of the world now. Whether Israelis or anyone else like it or not, it just is.

I was shocked to see these walls, it’s a new apartheid, barbaric behavior: How can you impose such a collective punishment and separate people?

Israel’s system of racial domination and segregation against Palestinians meets the definition of apartheid under international law. The [BDS] movement is a Palestinian-led, anti-racist, and nonviolent grassroots campaign calling for an economic and cultural boycott of complicit Israeli companies and institutions in response to the apartheid system and other grave human rights violations…. I am responding to the call from Palestinian civil society, including all major Palestinian trade unions and writers’ unions.

Either it ceases to be a Jewish state or you say the Arabs don’t get to vote — apartheid. That didn’t work too well the last time I saw that practiced in a country.

The violence and atrocities we are witnessing in Sheikh Jarrah, the Al-Aqsa compound and Gaza are a continuation of decades of Israel’s brutal apartheid and violent occupation of Palestine. We stand with the Palestinian people as they resist this colonial terror in all its forms.

Rage Against The Machine

As much as I want to play Israel, I have decided not to in solidarity with Palestinians who will not have access to my show. After days of discussions with many, I’ve decided to try and visit Israel and Palestine with those who fight to end the state of apartheid rather than use my art to force the issue on those who would rather not deal with it.

“Who said it when? A timeline of the term ‘apartheid’ in relation to Israel” – The Forward, May 2021